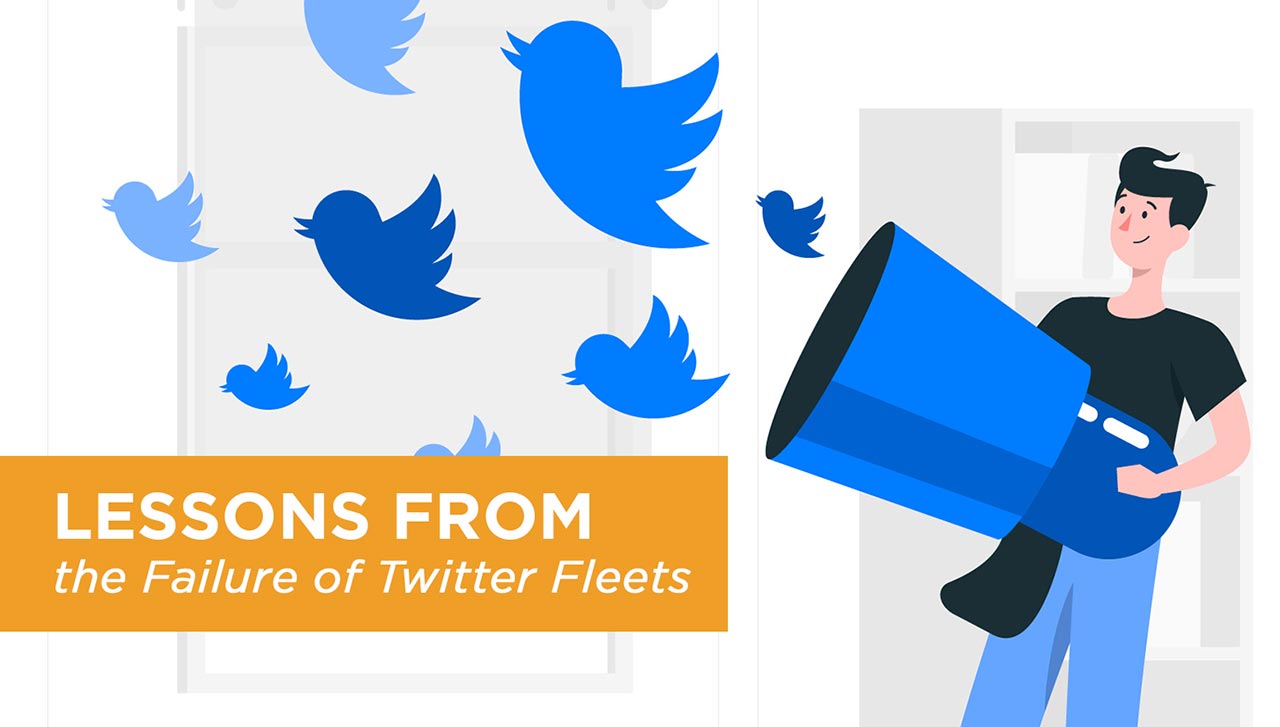 If Twitter isn’t your social media platform of choice, then you may have missed Twitter’s brief venture into the realm of Stories. Twitter Fleets was a feature available worldwide from November 2020 to August 2021. It allowed users to create text/media content for their page that would disappear after 24 hours. If you use Snapchat, Facebook, Instagram, Youtube, Pinterest, or LinkedIn, this feature will be very familiar.

Since this fleeting Twitter experiment is already at the end of its course, why are we focusing an entire blog post around it (besides needing to feed the ever-hungry SEO overlords, of course, ????)? We believe that this is a perfect opportunity to discuss how important it is for your social media marketing strategy to have an in-depth understanding of these platforms and their audiences. That way, you won’t end up riding the wave of some new feature, only to end up crashing on the shore.

If you follow any of our socials, you may have noticed that we often post about the new features and updates within the world of social media. For instance, we recently shared this article about the new Live Audio feature coming to Facebook. When our team of social media experts sees something that will be useful or game-changing for our clients, they make sure to get the word out there. In all honesty, we weren’t surprised to hear that Twitter is pulling the plug on Fleets. It’s shelf life seemed to be limited from the very beginning.

One of the primary reasons why Twitter thrust Fleets into the world is similar to why Instagram developed its own version of Stories years prior. Instagram had noticed that their users were showing more hesitancy when it came to posting photos on their profiles. Although many factors fed into this “posting anxiety,” it was mainly attributed to 1) the growing societal concern over the permanence of content left on the internet for all to see, and 2) the frustration people were feeling over their feeds being flooded with user-generated content they didn’t care to see.

Thus, Instagram Stories was developed as a way for people to share their daily adventures and updates in a way that was temporary, and which could be viewed by other users in a more optional manner.

By the time Fleets came out, the online world had been experiencing the general success of the Stories that were now a central component of our favorite platforms. It’s likely that Twitter Fleets simply popped up too late in the game. Since we already had the option of posting ephemeral content on our other socials, why bother adding Twitter to the list? Though this was certainly one of the reasons why folks just weren’t that excited to get their Fleet on, there’s more to the picture.

The other dominant problem with Fleets lies at the heart of how Twitter is used by its audience. Tweeters generally don’t tweet for the same reasons that an Instagrammer might gram. Instagram Stories are most often used for sharing personal updates, like letting your friends know that your dog is okay after eating an entire tube of toothpaste or posting aesthetic photos of your vacation to Cancún with the caption “Take me back ????????????.”

Twitter users are less interested in sharing whatever restaurant they’re dining at and more concerned with joining wider cultural and political conversations, being updated (and cracking jokes) about current events, connecting with niche communities, and engaging in a whole host of activities that favor longer-lasting posts.

What’s the Story on Other Stories?

What does the defeat of Twitter Fleets mean for the rest of the Stories out there? Should you stop focusing on Stories altogether? The short answer is absolutely not. The whole Fleet experiment goes to show that each major social platform has its own distinct uses and audience. Understanding the ins and outs of these sites is crucial in the world of digital marketing, lest you end up devoting company resources to Venmo Stories after its inevitable launch.

When it comes to knowing which social media platforms/features to use, and what kind of content is appropriate for each site, the dedicated folks at Get Community can’t be beaten. If you’re looking for social media marketing assistance, we would love to chat with you!